The peaceful resort Jella Island has been attacked by aliens that came out of its volcano! Now they've trapped all of the poor slimes in crystals and triggered a terrible eruption. Lucky for them, vacationing heroine Jelli was busy at a day spa when it happened. It's up to her to bounce and trounce a path through invaders and save her fellow slimians!

I'm basically out of time to work on this, so I'm releasing it as-is. There are three worlds and a ton of rooms in each one. Should take around 15 minutes to beat, if it's beatable.

Down - Drop down through thin platforms

Jelli's trajectory can't be changed while in blob form. Release Z in mid air after bouncing to maneuver your way through the air.

Slimes trapped in crystals require 10 cyan gems to save.

Orange and cyan (not used) heart shrines add a temporary extra 4 HP in exchange for 5 of their respective gems.

Stone blocks will break when bounced against. This will also break all connected stone blocks. They'll reappear after a second or two.

There are three hidden cards in each world. Collected cards are (aka should be) saved between game startups.

There's no penalty for dying and Jelli will quickly respawn back at the nearest door or pink flower. 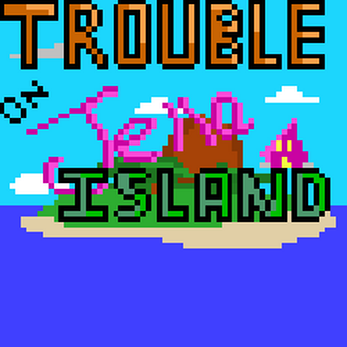