Hey hey, it's Hiroshi: Club Valentine's Mister August! He's a cheery sort who's full of life, even if it's hard to understand how his mind works sometimes. Sometimes people aren't sure if it works at all, but his emptyheadedness just makes him cuter. Hiroshi's the type who can go from 0 to 100 in a second, then back again the moment he calms down. He's great fun at parties!

We're pretty sure Hiroshi is from Sweetport, because whenever anyone asks where he's from, he just says "y'know, around here," but maybe he's just referring to where he lives. Being such a carefree sort, it's hard to find a question he won't answer. It's equally hard to get a straight response from him!

Hiroshi's great friends with Max and they often work shifts together. They're roommates, and love to hang out after work and play video games! You might also see them getting ice cream together, but it's totally not a date or anything.

As you might've guessed, Hiroshi's pretty popular with Club Valentine's patrons. Though he's not so great at picking up on flirting, he isn't very picky about his VIPs. Just tell him you wanna fuck and he'll immediately light up!

Likes: Relaxing, eating sweets, video games (even though he's not very good at them)

Dislikes: Whatever extremely specific thing is irritating him at the time

Kinks: Being petted, bigger partners, being told what to do

Here comes Max, Mister September! He's sweet, lighthearted, and as squishy-soft as can be! Everyone loves having Max around because of his soft-spoken kindness. He's always happy to help when lifting or heights are involved, and he's a good listener too.

Max is from around Sweetport and loves his family and friends. He lives with his best friend Hiroshi, and they're never far apart. Max learned from his family how to sew at an early age, so he's always crafting gifts for people. It's a good thing Hiroshi enjoys receiving gifts, because Max makes him something practically weekly!

Helen is a family friend of Max's, so it was no surprise she hired him. At Club Valentine, Max is loved by co-workers and patrons alike- He may be big, but nobody minds bumping into him because he's so soft! Max even runs a weekly crafts club with Rory and Helen at the club that dozens of regulars come to. Hiroshi comes in handy here, because he can model the things Max makes for him.

In private, Max is as sweet and soft as ever, and loves having cute small partners wriggle underneath him as he whispers into their ear. Those big paws and thighs also come in handy for gently pinning people down...

Random fact: Max designed the pattern for the masculine Club Valentine uniform, while Helen designed the feminine one. 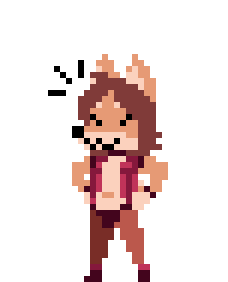 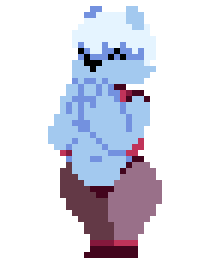 I've been doing one for every character, so if you'd like to see them as they come out, along with more about the game's development week-by-week, please check out the Patreon!

Serve up drinks and please patrons in a posh adult club!